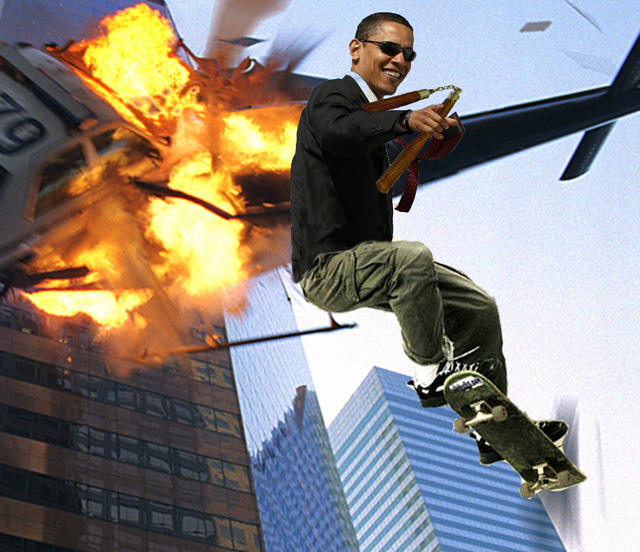 Barack Obama took a moment to pause as he crawled through the White House’s air ducts, intent on exacting his revenge on those who had put him in this situation. He recalled coming home, two weeks prior to the election, only to find a dozen members of the SWAT team waiting for him. He remembered their sad, disbelieving looks as they piled up tons of Al-Qaida propaganda that had been wrongfully been planted in his home. He even remembered the look on his neighbor little Jimmy Johnson’s 13 year old face as he ripped off his Obama/Biden button, threw it to the ground, and then spat in Obama’s face. Barack could feel the sting of the child’s spit even as he was thrown into the back of the SWAT vehicle and take away on a route that would eventually lead him to the deepest darkest depths of Guantanamo Bay. Now, five months later, he sat huddled in an air vent above the oval office, munching on an arugula, brie, and pear croissanwich that he had managed to conjur up while riding first class back to America. It was time to let people know who the rightful president was.

Barack finished his sandwich and began crawling towards the war room, where he had heard Hillary Clinton, President of the United States, scuttle off to before he so eloquently dispatched of her husband, former president William Jefferson Clinton. He paused, as he heard voices below.

“Hillary, my friend, this is not why I agreed to be your vice president,” sputterred John McCain, still reeling from the piping hot Chai latte that Hillary had thrown in his face. He looked up to see the commander in chief with fire in her eyes.

“Listen, John, I know you have ‘foreign policy experience’ and everything,” retorted Hillary, air-quotes and all, “but I’ll have you know that i know exactly what I’m doing without you.” She moved back to the war table and picked up Russian president Dmitri Medvedev again. “You see, I know this guy’s a pansy. I know that if we ally with…” she scanned the map, picking up French president Nicolas Sarkozy, “…say, this guy, we should be able to kick his pussy commie ass.”

“I KNOW WHAT I’M DOING!” Hillary screamed as she chucked the figure at McCain, who blocked it with little hesitation. Hillary raised an eyebrow. “How did you dodge that?”

Suddenly, there was a large crash as Barack Obama smashed through the air duct above and flipped down to the ground. “I think the real question, Hillary, is how are you going to dodge my plan for your demise!”

Hillary’s eyes widened as she turned her back to McCain and faced her former Democratic nominee competitor. “Barack Obama! How the hell did you get here?”

Barack cracked his knuckles. “With grit, determination, and a little bit of hope.” He paused, tilting his head back in reflection. “also, I killed a lot of people.”

“Well, you’re not leaving this room alive!” Hillary blared, pulling out a gun from her belt and tossing it to John McCain. “John! You know how to fight. Kill him!”

McCain raised the gun in front of him, feeling the smooth, cold metal upon his fingertips. Instantly, he was reminded of the Republican values that he stood for and had fought so hard to protect. Unflinching, he aimed the gun and fired.

President Hillary Clinton gasped out in horror as the bullet pierced her heart. “Jo—John….w–w-why?”

“My friend, you are unfit for command. I am hearby relieving you of your duty from this earth.” With that, John McCain emptied the chamber into Hillary, and she slumped to the floor, dead.

Barack Obama observed the situation in front of him, and after a moment, moved to shake John McCain’s hand. “Sir, I know we debated long and hard about our policies, but right now I can confidently say that that was the best decision you have ever made.”

McCain stood there, staring at Obama’s outstretched hand. “I’m sorry, Mr. Obama, but you see… I’m the president now. And I’m afraid I can’t let anyone jeopardize that.” McCain snapped his fingers, which brought two White House page boys into the room, who instantly began moving Hillary’s body aside. “You see, Hillary was insane. But unlike her, I don’t need to control everything. I know my limits. But I do need to control the direction of this country. I need to make sure that every mother, father, and child believes in the fundamental message that my party strives for: government control is evil, unless we’re trying to ban something like gay marriage, abortion, or casual Fridays. Then it’s ok. For too long I’ve watched Hillary bastardize the white house with her pro-menstrual cycle agenda. But now, it’s big John’s time to rise.”

Obama approached McCain, his hand still outstretched. “Look, John. You’re out of bullets. We don’t need this partisan conflict. We can be president, together! Think of how wonderfully progressive that would be! It would be an administration full of change and hope!”

“I’m afraid it’s too late, Barack.” Mc Cain inched closer to a door in the wall, hovering his hand over the button that would open it. A smile formed on his lips.

“Wait, John, don’t do it!” Obama cried out, as John pushed the button. The door groaned and hissed open as fog and smoke blew out from the white, cold room behind. A shadowy figure appeared from the mists and the faint smell of Clinique lipstick filled the air. Obama narrowed his eyes as he tried to make out the figure.

“Yes, that’s it,” exclaimed McCain, wringing his hands together in joy, “come forward!” The mists began to clear, revealing the figure to be that of a slender woman dressed in a red suitjacket with a sash that read “Miss Alaska” draped over her supple bosom. In one arm she held a rifle and in the other, an infant. Unflinching, she cocked the rifle with her free hand and swung it around to point at Barack.