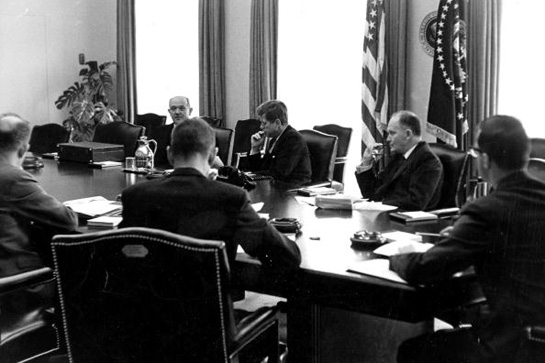 “Now see here, Johnson,” exclaimed John F. Kennedy, the 35th President of the United States, “it’s 10 in the morning on a Sunday, what’s the big idea barging in here like this?”

Marilyn Monroe rolled over on her side, resting her arms on Kennedy’s lap. “Who is it, Jack?” she drolled.

“Well it’s just Lyndie, Marilyn. You’d better get yourself cleaned up, Jacqueline might come back from Church any moment now.”

“Now, ah, what was so important that you had to come barging in here, Johnson? You know this is Marilyn Hour.”

“Sir, it’s the Cubans. They have missiles. Lots of them. And they’re pointed right at us,” replied the Vice President.

“What? The Cubans? Missiles? Well, ah, Johnson, that sounds like we have a darn crisis on our hands. Better get me a hot cup o’ Joe, and bring in Lincoln’s portrait, will ya?”

“Yes sir,” replied Johnson. Kennedy turned all business following this encounter, and quickly shooed out Marilyn Monroe. The President rushed out of his bedroom in such a hurry that he forgot to put on his pants, however seeing the President pantsless in the early hours of a Sunday morning was not unheard of. On his way to the oval office, Kennedy was greeted by his Secretary of Defense, Robert S. McNamara.

“Howdy there, Rob, you heard about this, ah, Cuban Missile Crisis thing?”

Robert S. McNamara huffed. “Yeah, those damn commies are trying to wipe us clean off the map.”

“I know what you mean, Rob. It’s a damn shame. They’ve got a better space program, more missles, and finer women. I tell ya, if I ever get tired of this job as, ah, president, I’m gonna fake my own assassination like Lincoln did and move to the Soviet Union, get me a servant-hooker-girl, and, ah, you know, participate in the glorious wonder that is organized Marxist Socialism.”

“Well, ah, if it isn’t my little brother Bobby. Isn’t a little too early in the morning to be, ah, drinking?” exclaimed the President.

“I got it from Teddy,” said Robert Kennedy, “he told me I would need this if I was to end up fightin’ ya.”

“Oh, so it’s come to this again, has it? A little of the ol’ sibling rivalry, eh?” Just then, Lyndon Johnson returned with the President’s coffee in one hand and a portrait of Abraham Lincoln on the other. “Ah, good, thanks Lyndie.” John Kennedy grabbed the portrait and held it out in front of him. “You did great wonders for the American people, Abraham, and you’re the only good Republican I know. On my dead baby Patrick’s eternal spirit, I pray to you to give me the power to, ah, vanquish the Cubans and my little brother.”

The Lincoln portrait immediately began glowing, and it emitted a beam of light that covered the President from head to toe. He stood there taking it all in, laughing in his glory.

“Well this is fucking amazing, Johnson!” he exclaimed. With that, the President tossed aside the portrait, charged at his brother, and slammed his iron fist into Robert Kennedy’s jaw, sending him flying into the Red Room. Kennedy turned to his Vice President. “Lyndie, get me Khrushchev on the phone, and tell him he that if he disarms the missiles, I’ll make sure that this Cold War lasts until 1991, and I’ll come over there to, you know, help him running the country in a few years. Heck, I’ll even through in Marilyn and my brother Bobby.”

“Of course, sir!” emphatically excliamed Johnson, and he skipped merrily into the War Room.

Robert S. McNamara stood in awe of John Kennedy. “You sir, are the greatest negotiator in the history of the world.”

And with that, John F. Kennedy ended the Cuban Missle Crisis.