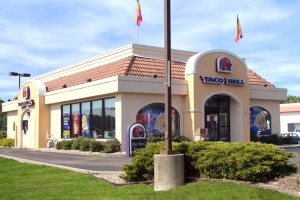 As some of you who know me know, I have many adventures when I travel between point A and point B. A great many of those adventures deal with my frequent excursions between Santa Barbara and Orange County, my old stomping grounds. Let’s just say that today, I had the adventure to end all adventures. Except maybe that time where my train was delayed for 2 hours because of a bomb threat. And the time it took my 5 and half hours to get home on a Wednesday. But…it still ranks pretty hight up there.

So this adventure started as any other Sunday commute back to Santa Barbara. After spending the day with my good friend Julia, I embarked on a series of freeways to eventually lead my back to the inevitable 101. It was on the 101 just out of LA, however, when I realized that…something was different. Something was…amiss, if you will. Indeed, as I entered Calabasas, I developed a hunger for something that I do not normally hunger for. I developed the hunger for TACO BELL.

If you’ve never had a beef and potato burrito from Taco Bell, you don’t know what you’re missing. Having one of those burritos, with their majestic blend of spices and processed meat and vegetable products, is like spending 5 minutes in clogged artery heaven. It was this burrito that I suddenly had a craving for. I resolved to stop at the first Taco Bell that I came across and order a pair of the delictable concoctions. Unfortunately for me, finding a Taco Bell off the 101 past Los Angeles is like finding a gay black Republican in Massachusetts. As I drove into Ventura county, I knew my chances were becoming slim. Would I really have to wait until I got to Santa Barbara, where there are an abundance of Taco Bells, in order to have my fill? Why were there so many McDonald’s and Jack-in-the-Boxes? I decided to try my luck at a random exit. Gas, food, lodging. Surely there would have to be a Taco Bell at one exit.

My first attempt was rendered useless. I found, indeed, a Del Taco, but it was not Dan the Del Taco man that I yearned for on this cloudy evening. As I wandered through Thousand Oaks, my mind began to wander. What if there was no Taco Bell to be found? What if I had to settle for a Jumbo Jack or a…dare I think of it…Big Mac? No. I would not let that happen. And yet, as I got deeper and deeper into Ventura County, there was one thing that I knew for sure. Time was running out. I got off for the third time in a city I had heard little about: Camarillo. Being from the city, I had already formed impressions of the rural villages that lay on the outskirts of Los Angeles. Little did I know that this fine hamlet had in store for me. As I exited the freeway at Lewis Road, I discovered a quaint road that ran parallel to the highway. “What luck!” I thought to myself. Surely I would be able to find a Taco Bell along this corridor of businesses. As I turned the corner, I discovered a Jack-in-the-Box and a Wendy’s. Undanunted, I continued along. Unfortunately, the word got narrower and less business-like. Shear horror came over me, the kind of horror that could only be felt by a prostitute in church. Panicking, I knew that the next corner I turned might be my last before I was forced to get back on the 101. The DAMNED 101, with it’s lack of food chains visible from its lanes. Turning the last corner, however, I discovered the holy grail of my quest: The finest Taco Bell ever to grace my eyes.

And just then, it started to rain. And I started to cry. And that is why this quaint village of Camarillo is my new favorite place. Ever. Thank you, wise city planners and Camarilloans, for building a Taco Bell at such an opportune location.