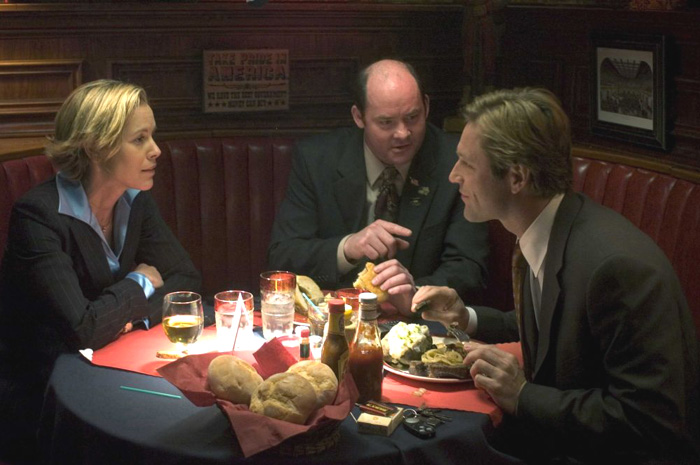 Recently, (alright, yesterday) I finally managed to see the movie Thank You for Smoking, which you probably know has been on my radar ever since it screened at the Santa Barbara Film Festival in February. The film stars a good cast and details the life of Nick Naylor (Aaron Eckhart), an executive and spokesman for the Academy of Tobacco Studies, which is nothing more than a cigarette company think-tank. Naylor naturally comes under fire for his profession of choice (which serves basically to be a media outlet for the tobacco companies), and particularly becomes the target of anti-smoking Senator Finistirre (William H. Macy) from Vermont, who is campaigning to stick giant “poison” labels on the side of cigarette boxes. Adding to the complexities are Naylor’s son Joey (Cameron Bright), whom Nick must act as a father figure for, and a career-oriented newspaper reporter (Katie Holmes) who will do anything to bring the lobbyist down.

The film is entirely satirical and irreverent. Never once, despite all the evil that Nick Naylor stands for, could I bring myself to dislike his character. The Naylor character works on multiple levels: first, he must convince whoever his audience is (people on a talk show, Dennis Miller, the Senate) that he is not the bad guy of the situation, that he actually cares about all of the people his industry has killed. Second, he has to convince us that he means what he’s saying in the movie. Eckhart successfully manages to tie together both of those levels with a heavy but affective dose of Fox News-ish spin. When Naylor berates Senator Finistirre’s top aid on national television, I, along with the audience of the talk show, agreed with what Naylor was saying, despite the fact that if one thinks about it for little more than a second, the argument is full of holes. The satire succeeds here because it makes the audience (and myself) sympathize with a character who no one should be sympathizing with.

Naylor is not alone in his accomplishments; throughout the film he is shown meeting with the self-proclaimed “MOD squad,” an acronym for “Merchants Of Death.” The other two members of the squad are comprised of lobbyists for the alcohol and firearms companies (Maria Bello and David Koechner, respectively), and the trio often debate about whose industry is killing more people, with Naylor usually coming out on top. The thing that makes these scenes work is the fact that each character is given a certain degree of not only likability but believability, such that the conversations between these characters, however outlandish and wrong they may be, are entirely believable and authentic. These could be any three people meeting after work, discussing the finer points of their days over a drink, and in fact, that’s what they are (nevermind that their conversation frequently dabbles in such topics as who’s more deserving to be kidnapped by terrorists).

While the nature and ethics of the tobacco industry is the main focus of the satire in the film, there is also a brief but unforgettable jab at Hollywood and the immense amount of absurdity that plagues the system. At one point Naylor travels to the star-studded city to attempt to convince super agent Jeff Megall (Rob Lowe) to put cigarettes back into films. The scene features such details as the “blink-and-you’ll-miss-it” lobby video of a killer whale feasting on a seal, a series of superficial one-liners delivered by Megall’s assistant (Adam Brody), and a vivid explanation of a Pitt/Zeta-Jones space sex scene, which, coupled with the eccentric (yet brief) performance by Lowe, easily serve as farcical commentary on the state of The Industry today.

Thank You For Smoking is a delightful break from other, less funny attempts at satire and parody that are currently out in theaters, and of course is also performing marginally at the box office, which is natural for the current state of cinema being as it is. Sure, you can laugh at cheap gags and lame, Mad-TV-esque jokes (I’m looking at Scary Movie 4), but wouldn’t you feel just a little bit smarter if you laughed at something a little more wholesome? After all, not every movie can make references to seal-clubbing and sweatshop labor and manage to extort more than a muffled giggle from me.

Thank You For Smoking: 9/10
(loses a point for the unnecessary extra press coverage garnered by Katie Holmes being in the movie, and for the somewhat tacky “twist” ending that allows for that viewer to have that Hollywood “feel good” effect)